De Havilland Canada recently announced the approval of its new Simplified Package Freighter Conversion by Transport Canada. This means that all versions of the Dash 8 series aircraft are approved for the conversion – (Dash 8 -100/200 and 300) as well as the Dash 8-400.

The background for this article stems from the writer’s long experience with the DHC brand, including as a pilot with over 2,500 hours in DHC-6 Twin Otter aircraft, and also as Chief Instructure in the De Havilland Aircraft Ground school in the mid-seventies. For a brief period at DHC, I was part of the team of aviation technical publication writers for the Dash-7 before taking on the role of Chief Instructor.

Having spent so many hours in DHC’s exceptional products, the story I am about to reveal will tell you some of my best experiences and one of the worst!

I can attest, however, that the aircraft that De Havilland produced and still manufacturers today are some of the finest and most efficient mid-size airplanes ever built in the aviation industry.

One of the reasons I am alive to tell this story is that the DHC-6 Twin Otter I flew in Guyana, South America was a rugged, incredibly well-built STOL aircraft and performed well above its certified capabilities.

At the majority of our bases at Guyana Airways in the ’60s, we were operating the Twin Otter at the maximum STOL capabilities of the aircraft. Unfortunately for this writer, one day, the plane I was flying had a massive overload (unnoticed by the flight crew) of well over 2,200 pounds. This was on a very short runway at very high temperature and high humidity.

Were it not for the excellent handling and aerodynamic features of the Twin Otter, there would have been a very different outcome for the passengers and crew. See the full story at the writer’s web site; www.aviationhotshot.com under Aircraft (Aircraft Accidents & Near Tragedies). 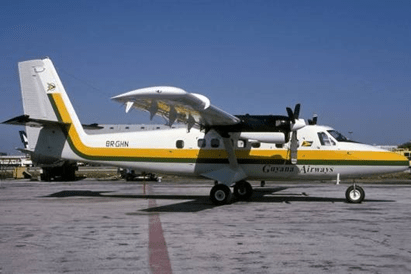 This article would not be complete if I did not reveal why I left De Havilland to work for its main competitor at the time. I had developed a plan for DHC to purchase simulators for its new aircraft models, only to learn that the management decided the project funding was denied.

In an unwarranted display of anger, I quit and went to work for Embraer Aircraft. I have always regretted that decision, even though my time at Embraer was an enjoyable experience in many ways.

I learned within six months of my leaving DHC that the flight school was sold to Flite Safety! And flight simulators were the first order of business for the new operation. The decision to sell the flight school I felt was not the best solution for DHC, so I was pleased to have made my decision at that time.

The new De Havilland brand for the Dash-8 is entering a new era! The brand is now owned by Longview Aviation Capital. This company holds the type certificates for the original product line of De Havilland aircraft, and under the Viking Air corporate name will continue to produce the Twin Otter line of aircraft.

My heart and best memories, however, are all De Havilland related. I have many exciting stories and adventures with the Twin Otter (Series 100 & 300) in some of the harshest environments in the world, and this incredible STOL airplane never let me down.

The latest approvals for the Dash-8 Simplified Package Freighter Conversion, together with the latest developments underway for the Aerial Firefighter amphibian CL-415 model the company is well placed to enjoy the 50th anniversary of Viking Air! New sales have recently been announced for the Aerial Firefighter amphibian to the Indonesian Government.

New stories and developments of De Havilland Aircraft will be closely monitored, and I will bring you all the latest developments as they occur. Stay tuned!