Never before has an aircraft been so anxiously awaited as this latest version from a venerable aircraft company like De Havilland. This aircraft company, with its famous name from way back before the second world war, invented, developed, and manufactured some of the finest specialty purpose aircraft ever to grace the skies.

I recently wrote an article about the looming disaster of wildfires across North America. Never realizing that the latest production from this Canadian company was the most up-to-date firefighting aircraft that will now be manufactured in Calgary, Alberta.

The DHC-515 has evolved from the stalwart backbone of amphibious aerial tankers fighting fires in several countries known as the Canadair-215 waterbomber and its upgraded model to the last version, the Canadair-415.

The beauty and versatility of these aircraft are due to the ability to pick up thousands of gallons of water from any nearby lake or large body of water in mere seconds and then head back to the fire zone for another attempt to douse the flames. The DHC-515 will deliver the highest quantity of water into a fire zone per day (almost 700,000L), more than twice as much as its nearest competitor.

Canada’s firefighting aircraft have been in operation for the past fifty years in Europe and North America, and there are many of these amphibious aircraft based in various parts of the world and providing outstanding support for the firefighters on the ground in these extremely dangerous conditions.

As climate change has forced its way into our lives with devastating consequences for every corner of the globe, these specialized aircraft are becoming a familiar addition to fighting wildfires in less-than-ideal conditions. The DHC-515 features the latest safety measures and unique electronics guidance systems that allow them to fly at night and continue providing almost round-the-clock service where needed.

De Havilland Aircraft of Canada has delivered over 5,000 aircraft of every type, from single-engine bush airplanes to twin-engine utility and commuter aircraft. In many configurations in support of medical evacuation, search and rescue, reconnaissance, as well as coastal surveillance roles. The De Havilland DHC-6 Twin Otter has performed in the harshest climate conditions including at the South Pole during the worst blizzards, to effect lifesaving evacuation for explorers and workers manning research facilities at the bottom of the world.

I have a personal experience to share with you. I worked at De Havilland aircraft in the early seventies in an assembly group to configure the first DHC-2T, Turbo-Beaver, into a water bomber. The experimental engineering design called for spaces in the two floats that changed the aircraft into an amphibian to be turned into water chambers. This would allow the Beaver to fly low and skim over any large water surface, deploy scoops in each float and pick up a sizeable amount of water without slowing the aircraft or landing on the surface.

Another petite guy like myself was tasked with inserting ourselves each day into one of the floats and completing the assembly of the doors that made up the exit for the water from the floats. Quite an experience and a noisy one to boot! The two of us were ‘entombed’ in each float for a few hours each day until the engineering work was completed.

We returned to our regular jobs and we heard nothing about this experimental program for weeks. Then out of the blue, we were called to a demonstration out on the tarmac in front of the hangars. We were not sure what was about to take place, but about 50 of us all asked each other, “do you know what’s happening”? Eventually, a guy with a tripod and an expensive-looking camera said, “The new Turbo Beaver waterbomber will be doing a fly-by.”

We assumed it was the same aircraft whose floats we had worked on, so we were pretty excited and spoke to a few of those around us, including a couple of older gentlemen in suits. When we identified ourselves as having worked on the experimental waterbomber, they looked at each other and smiled but never said a word.

We waited anxiously for about 15 minutes and were just about to give up waiting for something to happen when in the distance, we heard a single-engine aircraft on floats flying in our direction. The guy with the camera, who we now knew was a media photographer, said, “here it comes, guys”!

I can tell you that even today, so many decades later, I still feel the absolute deluge of water that aircraft dropped our heads. All of us, including the photographer and his equipment, were soaked entirely down to our shorts, socks, and shoes. It was an unbelievable experience, and I was at a loss for words. The two older guys were laughing and hugging each other. I guessed they might have been the design engineers for the project. 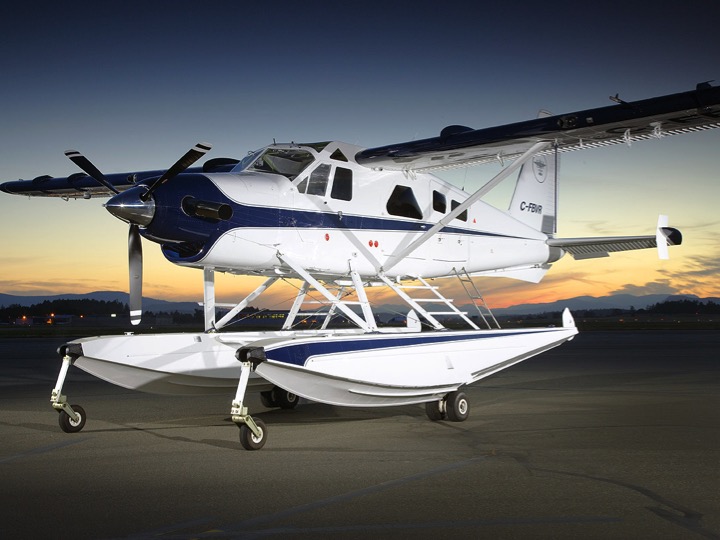 I’m sure the engineers at De Havilland were thrilled beyond their expectations. The company continued on this journey and eventually configured the DHC-6 Twin Otter for a similar firefighting role. And as you can judge from the DHC-515, they have not lost a beat and still manage to outclass their competitors.