Another air disaster that the airline industry can ill afford to experience during the Coronavirus Pandemic! The airline was just returning to minimal operating status this past week when the crash occurred. 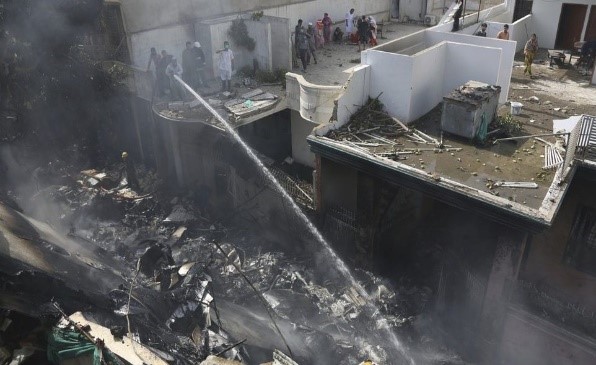 An Airbus A320 operated by Pakistan International Airlines (PIA) crashed approaching Karachi airport, killing most of the passengers and crew onboard the ill-fated aircraft. It has been reported that there were two survivors, to what could only be described as a miracle. The aircraft went down in a very densely populated area near the airport.

The pilot radioed a Mayday call and said that they had lost an engine and apparently had problems controlling the aircraft. The aircraft crashed shortly after, shearing off its wings between two buildings, disintegrated and caught fire when it hit the ground.

In recent airline news, I have examined the many challenges the airline industry will be facing once they try to return to normal service after a long period of inactivity due to the Pandemic and grounding of aircraft. I am hopeful that this may not have been partly responsible for this horrific crash but will ultimately be investigated thoroughly.

Recently updated details, however, indicate a much different picture than initially thought.

The following are now known factors surrounding the crash. The aircraft made two approaches to land at Karachi. The first approach was made without the landing gear extended. Both engines were operating during this approach. The aircraft came low enough to the runway that both engines touched the runway surface. Both engines left gouge marks at various places along the surface. At some point along the runway, the aircraft then accelerated and climbed away to make another landing approach.

On the second approach, the landing gear was seen to be extended. However, at some point in the second landing attempt, both engines failed, and the pilot called the Mayday emergency!

It can now be inferred that some damage to the engine(s) may have occurred during the first approach and contact with the runway surface.
The pilot, attempting to find a location to try and effect a crash landing, could not find an open space and elected or had no other choice and aimed for an opening between two buildings. This narrow opening sheared off the wings, and the rest of the aircraft disintegrated as it plowed through this narrow space, caught fire and was totally demolished.

We will keep a close watch on the findings of the investigation, and this may be forthcoming sooner than later as the black box has been recovered and that at least is one piece of good news for the investigators.