Aviation Correspondent Dave Rohee who has traveled the world reporting on Aviation News and events that are unique and interesting mentions the AN-225 Aircraft that has broken two world records recently. This magnificent flying machine is reported to be carrying huge quantities of medical supplies and equipment destined for countries suffering from the Coronavirus pandemic.

The first record flight of this unique ultra-large aircraft was from China to Warsaw on April 14, carrying tons of medical supplies – including medical masks, gloves and other PPE (Personal Protective Equipment). The total load was 1000 cubic meters and the largest load ever carried in this aircraft.

The second record flight was less than one week later, again from China to France, and estimated at 150 metric tons of PPE! It took loaders over 10 hours to unload the aircraft.
The AN-225, first This aircraft, designed and built in Ukraine, had its maiden flight on December 21, 1988. It has been used primarily as an ultra-heavy lift cargo hauler capable of moving incredibly large loads and has also been utilized for years supporting humanitarian crises in several parts of the world. 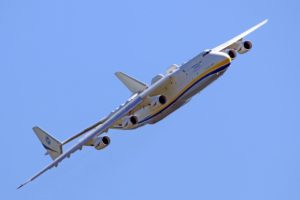