The Future of the Airline Industry

Recently and definitely due to the devastating impact of the Pandemic – Coronavirus, Billionaire Warren Buffet with little fanfare sold all shares he held in the US industries four major airlines!

This renowned financial genius owned 8 Billion dollars in shares! He was invested in Delta (11%), in American and Southwest (10%), and 9% in United Airlines. Does he know something that we should be paying close attention to? My guess would be most certainly.
Buffet’s decision was based on his view, “The World has changed for the airlines” he said. Thanks in no small part to the Pandemic, Americans will not be getting back to flying anytime soon and may never reach a similar level for many more years.

While Buffet may be unusually clear-minded and focused in any industry he has invested in his career, it really does not take a genius to see what the future holds for the entire airline industry, and not just in the US, but also worldwide.
Another factor to take into consideration is the overabundance of airplanes, sitting idle during this worldwide virus that has taken the world by storm and shows no sign of letting us get back to normal life.

Many airlines, both US and international airlines, most notably Emirates with 269 aircraft grounded and India extending its banning flights and train travel until May 17 will all contribute to a greater or lesser extent of how the airline industry will return to some profitability in the next five years!

Here is a photo of the Grounded Emirates fleet. An unusual sight to behold. 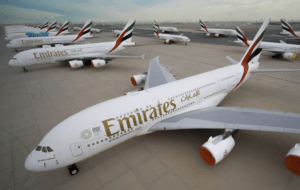 Several other major airlines – i.e. Singapore Airlines is considering selling some of its fleet in favor of newer and more fuel-efficient aircraft. A sure sign that major changes are taking place in advance of the “new normal” when international flights resume at better than minimal capacity.

To add to the problems of grounding aircraft, the most serious issue then becomes how to preserve these aircraft so that they will not suffer from an environment that is usually harmful to aircraft. The major factor being corrosion affecting the exterior of the planes and some of its more sensitive components.

Engines, Auxiliary Power Unit (APUs) inlets and outlets, pitot probes, static ports, and other openings on planes have to be meticulously covered. Even the landing gear has to be protected from corrosion.

Daily inspections of the fleet are mandatory, on the lookout for oil or hydraulic fluid leaks while confirming the exterior of the aircraft is still well protected. Every so often, air data probes must be flushed and cleaned. Any residue or build-up from time on the ground could lead to malfunctions.

These inspections are crucial for the safety and longevity of the aircraft. In fact, in March, some engineers found a bird’s nest under the wing of an Airbus A330 aircraft. Nesting from birds, bees, and insects produces a problem for parked aircraft. After all, you can’t really blame them. It is hard to find a nicer place to build a home than a shiny Airbus A330. 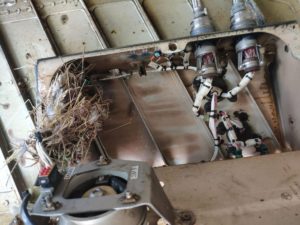 How do we get back to normal airline operations?

These and many more questions to be answered in future updates.